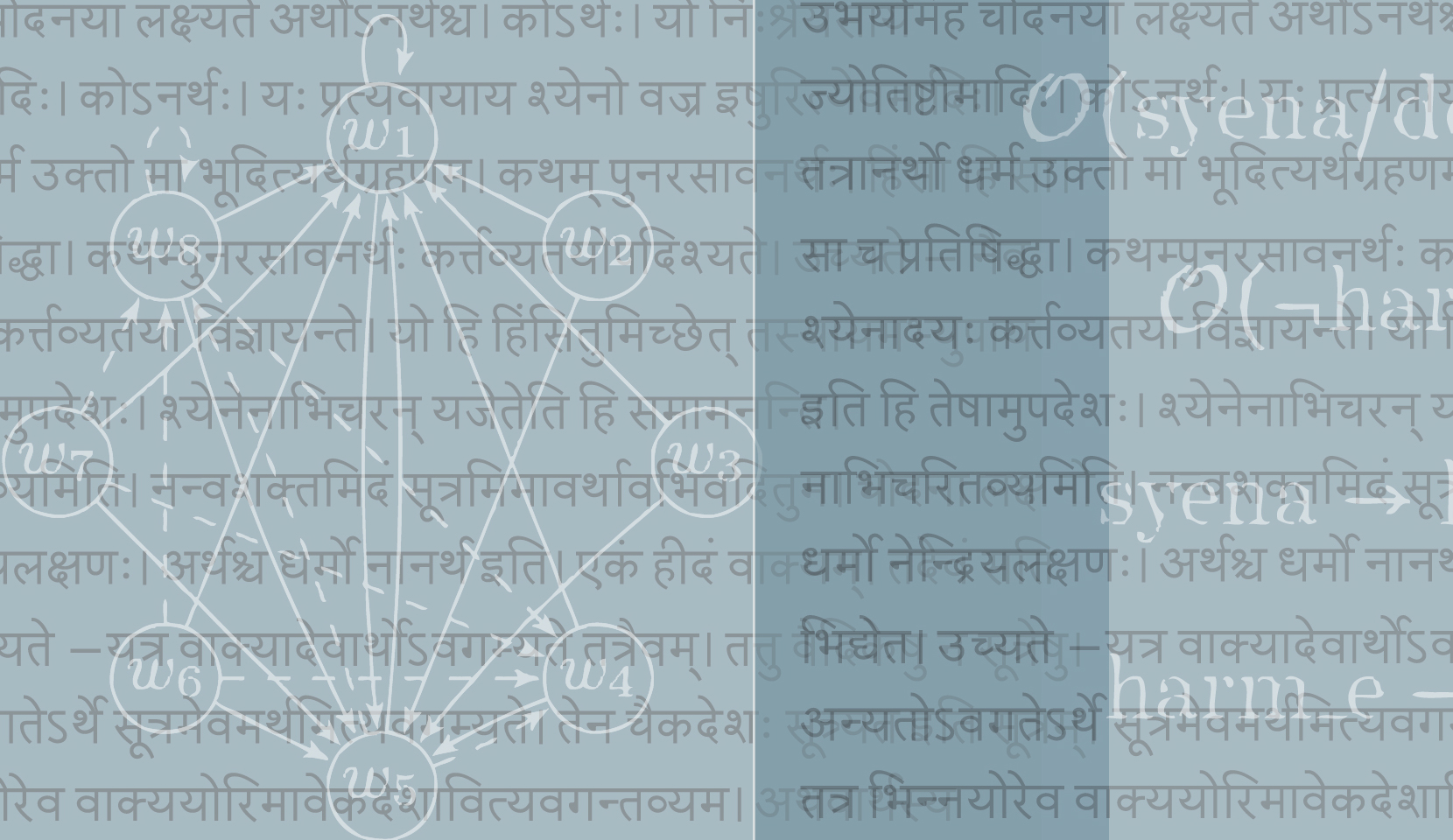 On Monday the 26th of July 2021, a panel on the influence of Mīmāṃsā on Sanskrit jurisprudence will be held virtually at the European Conference of South Asian Studies. The panel is organised by Elisa Freschi and will see the participation of, among other scholars, Agata Ciabattoni and Kees van Berkel. For more details, see here: link

As a result of new collaborations with the logic, AI, and normative reasoning group of the ICR University of Luxembourg (led by Prof. Leendert van der Torre), two workshops are organized on the topic of deontic logic, legal reasoning, and AI. The two workshop dates are January 21 and February 16, 2021. Talks (from the Vienna group) include presentations by Agata Ciabattoni, Björn Lellmann, and Kees van Berkel.

Xavier Parent joined the project as a researcher.

Ernst Mach Grant for the visiting Ph.D. student Tiziano Dalmonte on Specificity and compensation in the logic of Mīmāṃsā. Oestereichische Akademische Austauschdienst (OeAD). Scientist in charge: A. Ciabattoni. 2020-2021.

Maya Olszewski joined the project as a PhD student.

Marco Ferrante joined the project as a researcher.

Björn Lellmann gave an invited talk on aspects of the project at the Annual Meeting of the Swiss Society for Logic and Philosophy of Science 2019.

Ernst Mach Grant for the visiting Ph.D. student Francesca Gulisano on Solving deontic conflicts: The logic of Mīmāṃsā. Funded by the Oestereichische Akademische Austauschdienst (OeAD). Scientist in charge: A. Ciabattoni. 2019-2020.

The article Combining monotone and normal modal logic in nested sequents -- with countermodels won the Best Paper Award at TABLEAUX 2019.

Elisa Freschi will give a talk on Mīmāṃsā reasoning about conflicting statements at Mahopādhyāyamahotsava: Celebration of a Sanskrit Teacher at the University of Oxford. The details are:

Participants need to register for the event, see here for further details.

Elisa Freschi gave two interviews, in which the project is mentioned:

Volkswagen Stiftung, Artificial Intelligence and the Society of the Future, Call 2018, Planning grant.

Shishir Saxena will give a talk on permissions in Mīmāṃsā in the IKGA colloquium in Vienna. The details are:

Shishir Saxena presented a paper titled ‘Denotation as complex and chronologically extended: anvitābhidhāna in Śālikanātha's Vākyārthamātṛkā-I’ at the 9th Coffee Break Conference on Science and Technology in Premodern Asia (4-6 December, Wolfson College, University of Oxford) during the panel ‘Grammar and Language Science’. The conference brought together several leading scholars from across the world to present and discuss their work on premodern Asia. For an abstract of Shishir's talk see here.

A short report on the ATAI workshop was published in the SIGLOG newsletter.

Shishir Saxena joined the project as a researcher.

The workshop will bring together experts from the fields of Logic, Sanskrit, Philosophy, Artificial Intelligence and Law for talks and brainstorming discussions. More information can be found on the workshop's website.

Sudipta Munsi joined the project in May as a PhD student.

» New members of the project «

Kees van Berkel and Rafał Kłeczek joined the project in the beginning of January as PhD students.

A conference co-sponsored by this project will take place in Vienna, 28--29.9.2017. The purpose of the conference is to break the boundaries between "classical" and "contemporary" Indian philosophy, so as to make it possible for Indian philosophy and philosophers to become part of the ongoing discussion on topics such as ethics and logics. You can announce your participation to elisa dot freschi at oeaw dot ac dot at → See here. (ef)

Björn Lellmann (and Revantha Ramanayake) will give a tutorial at the Co-located conferences TABLEAUX 2017, FroCoS 2017 and ITP 2017.
When: September 2017.
Where: Brasilia, Brazil.
Title: General methods in proof theory for modal and substructural logics.

Agata Ciabattoni will give a course at the International Summer School for Proof Theory in First-Order Logic.
When: August 2017.
Where: Funchal, Madeira.
Title: Proof Theory for Non-Classical Logics: Sequent calculi and beyond.

Andrew Ollett will travel to India from July 30 to August 10 and will undertake research for the "Reasoning Tools for Deontic Logic" project. He will go to Pondicherry, to use the library of the Institut Français de Pondichéry and to discuss the project with colleagues at the École Française d'Extrême-Orient, and then to Chennai, where he will consult and photograph manuscripts of Mīmāṃsā texts that are held at the Government Oriental Manuscripts Library at the University of Madras.

Andrew Ollett (Harvard) joined the project on May the 15th.